Small Battle of the Bulge museum near Military Cemetery Henri-Chapelle

The “Remember Museum 39-45” is a museum about World War II at a human scale. The Remember Museum was founded by Mr. and Mrs. Schmetz as a tribute for the liberation by the GIs. They also want to commemorate the fallen, so in this way the horrors of war are not forgotten.

In December 1944 some 100 American soldiers of the 26th Regiment of the 1st Infantry Division were stationed in the farm of the family Schmetz. After six month deployment at the front, the soldiers of the 1st Infantry Division were recovering here at Clermont. This peaceful period was not of long duration. On December 16, 1944, Hitler began his last major offensive “Wacht am Rhein”. This offensive is also known as the Ardennes Offensive and the Battle of the Bulge. The 1st Infantry Division was called to stop the German counteroffensive. Headlong this unit departed to the front in the Ardennes. A lot of equipment and personal belongings were left behind on the farm of family Schmetz.

This material was saved by the Schmetz family. Supplemented by donations from veterans, the collection of the Remember Museum was formed. The collection now includes an M4 Sherman, a M10 tank destroyer, a Citroën Traction Avant, several dioramas, weapons, equipment and lots of pictures. During the tour the personal story of each item brings history to life.

This charming museum is focussed on the Battle of the Bulge. At this small museum you can easily spend an hour.

US militairy cemeteries nearby

The museum is located 3 km from the Military Cemetery Henri-Chapelle, where nearly eight thousand American soldiers are buried. Most were killed during the Ardennes Offensive. The Margraten American war cemetery is at a half an hour by car. 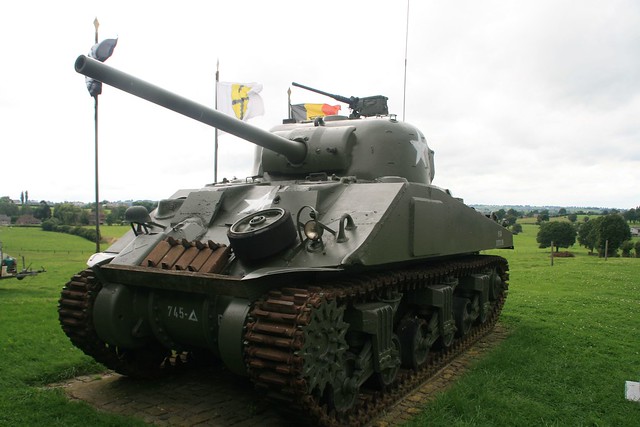