Royal Museum of the Armed Forces and Military History 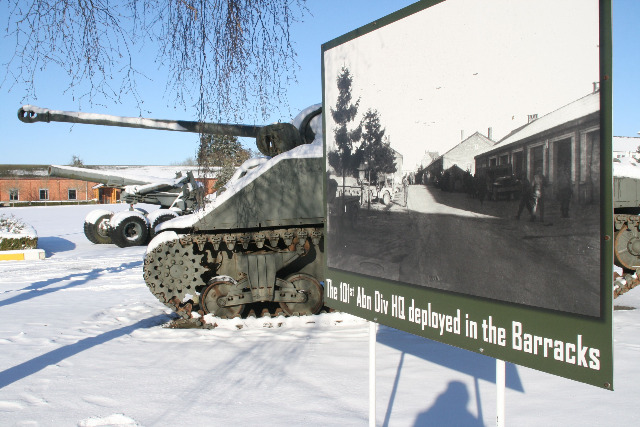 On December 16, 1944 the Germans launch their last major offensive in the West. Bastogne is a capital stake the Americans have to defend at all cost. On December 19, 1944 Brigadier General Anthony McAuliffe, acting commander of the 101st Airborne Division arrives in Bastogne with his division and he establishes his headquarters at the Sous-Lieutenant Heinz Barracks. On December 22, 1944 he writes history: he answers “Nuts”to the German troops encircling Bastogne and demanding surrender. His short but powerful statement becomes a turning point in the Battle of the Bulge.

Bastogne Barracks is a Belgium Military Museum. Since 2010 it’s an Interpretation Centre of the Second World War. Be sure to visit the “Nuts” basement illustrating a decisive step in the Battle of the Bulge, as well as the numerous exhibition galleries. Discover the “Vehicle Restoration Center” giving Royal Military Museum armoured vehicles a new lease of life.

Admission: days and hours
January and February: open on Saturday and Sunday and during Spring break – tour at 2 p.m.

October 1 till December 31: open from Wednesday till Sunday – tour at 2 p.m.

Groups over 20 visitors: upon reservation

This museum is focussed on the Battle of the Bulge, but also gives an overview of the Gulf War. This is a guided tour of about 2 hours, the guide will have intersting stories!

At the end of the tour you can see dozens of armoured verhicles and tanks.

Follow this link for more Battle of the Bulge museums in the Ardennes region.

Re-check calendar on their website for the opening days.